Knee up, rotate, and extend.
By Sensei Neil Prime, Yodan

When I first thought of karate I always thought of kicking. To me, that is what lured me into this fine sport. In wado, if you were to generalize, kicking as an offence or defense would only make up about 30% of our technique. Still, it is that 30% that I love more than anything else. Even if you don’t have the physical ability to kick to the head (which seems to be a common goal), that doesn’t mean you should ignore the fact that being able to kick adds great dimension to your overall range and performance.

I have observed for the most part that people that don’t kick don’t practice them a whole lot. I can understand that if something is difficult for you that it is frustrating to practice. It kinda makes us feel inadequate or foolish when we don’t think we “look good” when we are doing them, so we try to ignore them (or at least do the minimum, just enough to get by).

Hopefully I can put insight into some common problem areas to help you develop better kicks. You might not kick your partner in the head, but you will definitely add range to your offensive and defensive position by utilizing your legs.

First thing to keep in mind is that it is a whole lot easier to get your feet off the ground when your stance is close. A wide stance is good for stability but not for agility and definitely not for kicking. If you want to kick this usually means a slow take off. Chances are, unless you set up your opponent you are not going to score with the initial or a single technique. Set up your opponent the same as you would if you were going to use your hands.

In our club we if you ask them where the 1st position of every kick is, they will tell you in unison “knee to chest”. During your stretching routine, practice this position to make it easier to get your knee to your chest. The stretch would be similar to that of a sprinter positioned in the starting blocks. In basic kicking form, this is a must. Once you rotate your knee away from the front of your body as you would in a round kick this flexibility transposes into a good "knee up" position that will provide you with maximum range in your technique.

Your stretching routine should also include stretching through the form of a kick. Using a partner can do this. If you position yourself with proper form and have your partner move your body through the range this will aid in muscle memory and also give you an accurate assessment of your kicking range potential.

As you can see in the picture above the difference of a front kick and side kick. When doing a front kick your base foot is slightly turned out to allow the front hip to extend and posture is more upright. When doing a side kick the base foot is fully rotated and the upper body is leaning more allowing the stronger leg and back muscles to make it a more powerful kick while providing full range.

In essence, the total body motion of a punch and a kick are the same. If you want to gain full power and range in your punch, then you punch by rotating your hips. When you rotate your hips your feet rotate also. You must rotate your hips and support foot when you kick. The degree in which you rotate will vary depending on the range required for the kick. For an extended front kick you may want about 30 to 45 degrees. For a crescent kick you maybe looking at the same even though the extension of the kick maybe less than a front kick, the angle required to get it around to the target is the same because of the position of the hip. For a fully extended round kick or side kick you should be rotating your support foot up to 180 degrees. 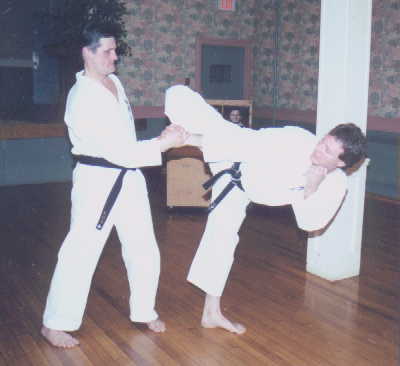 The difference of extension between a kick that is shortened as a result of the support foot not allowing the hip to rotate. You may think this is an exaggeration, but if you're having problems kicking then videotape yourself and study your range. Chances are it's the technique that is limiting your range, not your physical ability.

Body tilt also plays a role on the range of the kick. This again is an area that may vary depending upon the kick and the flexibility of your middle region (hips and waist, lower back and lateral muscles). The more flexible you are the less tilt you will need. This is good for speed kicks especially. When kicking with power your upper body needs to be involved in the rotation or you are not utilizing maximum strength. So, in essence, your foot can hit the same target with the same motion but the rest of your body is going to determine the effect of the impact. The final main area of concern would be the extension of the kicking leg. Most people wouldn’t dream of punching with a bent elbow, but for some reason many people don’t extend their kicks. Maybe it has something to do with the fear of hyperextension? But hyperextension is over-fully extended, not fully extended.

Think of your leg as a baseball bat. If you were to hit a ball would you want a bent or loose spring in the middle of the bat? The obvious answer in no.

To have the best kick you can create with the most range and effectiveness you must put all the ingredients together… knee up, rotate, and extend!

Back for More Great Reading